Highlander There can only be one 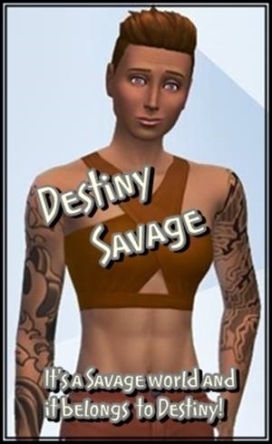 Her Story:
She was born as a survivalist meant to live alone and become a child of nature. Her wardrobe is simple and skin is tanned and freckled from exposure to the sun.
She successfully completed an early version of the EcoExistence challenge and later became a resident of Murkland in the challenge by Brennachan.

Valeda was called to become a ‘highlander’ in a game-play challenge by Buttonsginger.
Her story:
“It was the eve of the Blood Moon and the sky was bright with the ember glow. Valeda was getting ready to celebrate her birthday when The Watchers appeared to announce her fate. It was time to claim her heritage as The One.”
EA/Maxis liked this version and she was honorer by a spot in the gallery archives.

Her story goes on with Valeda becoming an action adventure star “Destiny Savage”.
“Renowned actress Valeda Tivona *IS* Destiny Savage! Valeda portrays Destiny Savage, a World Adventurer who sets out to explore the darkest most dangerous places on the planet in “Destined for Danger”. Filmed on location in Al Simhara, Destiny is held captive by worshipers of an ancient deity. Will her fate be sealed by the Mummy’s Curse? Or is MorcuCorp behind her misadventures?”
She is the perfect Sim for exploring Jungle Adventures and is featured in a simlit story Jungle Ruin: A Sims 4 I.S.B.I. Mini Series by LegacySims2017

One thought on “Valeda Tivona – My “Spirit Sim””

This site uses Akismet to reduce spam. Learn how your comment data is processed.

The Stories and Legacies Index

A virtual library for all Sims Stories and Let's Plays

All In Sims Time

Stories, News, and other things all in my Favorite Game "The Sims"

Stories from the Soul